By SABOOR NADEM and JOSH FRIEDMAN

A 17-year-old Afghan asylum seeker slit his wrists with a razor at a Greek refugee camp in Athens on Monday. The suicide attempt failed, and following a brief hospital stay, he returned to the Elliniko refugee camp with bandaged wrists.

The teen, whose name is Amin, said he left his family behind in Baghlan Province in Northern Afghanistan. Amin said the Taliban would attack Baghlan Province daily. He has now been living in Greece for about three months, and the situation is bad there, too, he said.

“I want to die because I am tired from this situation,” Amin said. “It’s better to die in one day.”

Amin left a trail of blood and a razor next to a fence on the side of the Elliniko camp. The camp is located at an old airport in Athens. Amin sleeps in large tent that he shares with a group of asylum seekers.

The Afghan teen said he is willing to accept help. Anyone interested in helping him should contact him by Viber at 0093-773-476-400.

Razor and blood left behind after the suicide attempt 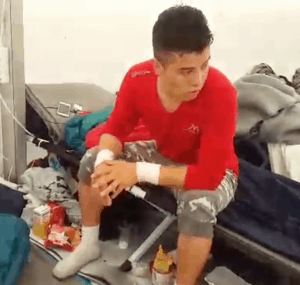 Amin in his tent at the Elliniko refugee camp